Millennials aren't the only ones dragging down homeownership

The precipitous decline in the homeownership rate since its 2004 peak—ongoing, despite an economy that has strengthened in recent years—has often left policymakers scratching their heads about what they might do to further incentivize homeownership among Americans—especially the younger lot. As of Q4 2016, the homeownership rate was 63.7%—well below its historical average of 65%. Moreover, homeownership among the 18-29 age cohort has fallen from a third to a quarter over the last 50 years, according to a report by the Demand Institute. Nevertheless, the report makes it amply clear that the younger generation, much like older cohorts, are still “seeking the American dream.”

As a thought experiment, CBRE EA is engaged in exploring the implications of a turn in home purchase attitudes among millennials—i.e., what will happen to the home rental market (where rent growth has been particularly strong) if they start behaving more like their baby boomer parents? Using data from the American Household Survey, population growth forecasts by age group, and assumptions about the future homeownership rate, we aim to build various scenarios around the rental market.

Notions about millennials being mortgage-phobic or allergic to raising families are largely myths. Survey (Fannie Mae) after survey (Trulia) show that renters between the ages of 18 and 29 aspire to own homes, which they believe to be a more sensible choice than renting for financial reasons that include protection against rent increases and certainly a better long-term return on investment. Popular reasons given for millennials’ falling homeownership range from high levels of student debt to stricter credit score requirements to the services and part-time focus of much of the economy’s recent job creation—which is lowering incomes. These real reasons are all contributing to varying degrees, but another reason—less discussed, but which has gained currency over time—is that there just isn’t enough affordable housing to meet young people’s needs.

Trulia’s survey points out that the shares of starter and trade-up homes on the market have dropped, mirroring a corresponding increase in the share of premium housing. The decline in starter homes has been particularly marked in cities like Portland, San Francisco, Salt Lake City, Orange County, San Diego, Houston, and Austin. It’s also worth noting that starter-home buyers in 2016 needed to spend an extra 5.6% of their income compared to those buying in 2012. So the 18-29 demographic is facing a host of financial constraints—which, coupled with lower supply of affordable homes, explains the fall in millennials’ homeownership rate. The popular perception is that marriage and household formation are the trigger, and that, as millennials get married and start families—albeit later than prior generations—homeownership will start to rise again.

Homeownership in decline across age groups 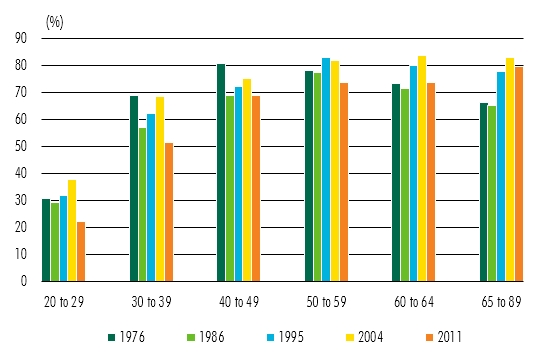 Well, millennials aren’t the only age cohort with a falling homeownership rate. Our preliminary findings from the household survey indicate that rate decline is pervasive across all cohorts, with the greatest declines in the 30-39 and 20-29 age categories. A substantial decline over 2004-2011, an increasing tendency among all age cohorts to rent, and a subsequent run-up in rent growth also explain why institutional investors lapped up low-price homes in foreclosure—particularly in the immediate aftermath of the financial crisis.

Watch this space for more findings from our ongoing research.