If Clicks Were Bricks: Assessing the threat to malls from online shopping

The mall is one of the most successful business models of all time, so its recent loss of traction in the marketplace has caused concern in the U.S. retail property sector. While the top 50 malls in the U.S. power ahead, many of those further down the hierarchy are finding it difficult to grow their net operating incomes.

What if clicks were bricks?

There has been a tendency to attribute the lack of growth to online sales and the concomitant growth of the logistics sector, but is it the juggernaut of popular perception? Figure 1 puts this in context by converting the dollar value of online sales into a retail floorspace equivalent. 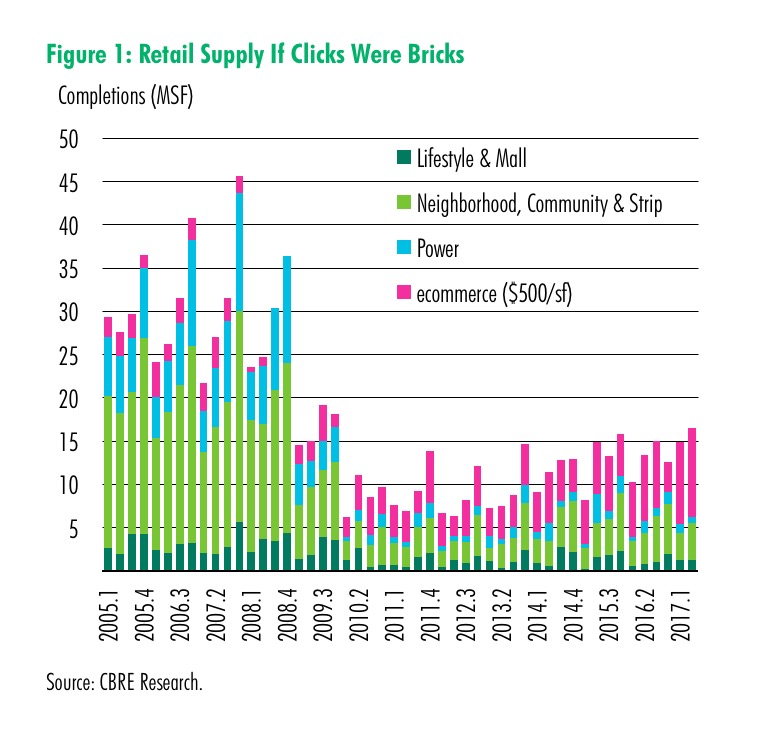 If clicks were bricks, this chart shows how many additional shopping centers they would represent. The conversion rate is $500 per square foot, which is broadly representative of U.S. mall sales density.

This cycle has been quite different for the retail sector: The rate of new development is much weaker than usual. When we add in the “virtual completions” due to e-tailing, the effect is not quite as dramatic as might be expected. Sure, this represents a headwind to the performance of existing assets, but consumer demand has absorbed this amount of space, and more, quite easily in the past.

So, what else is going on?

Four factors are at work—three cyclical and one structural:

Weak Growth in Household Income
The drop in real incomes after the Great Financial Crisis is quite staggering, and the problem goes back to the early 2000s (see Figure 2). However, there has been a cyclical turnaround, and real incomes are now growing quite strongly. This market growth is capable of being captured by retailers and malls. 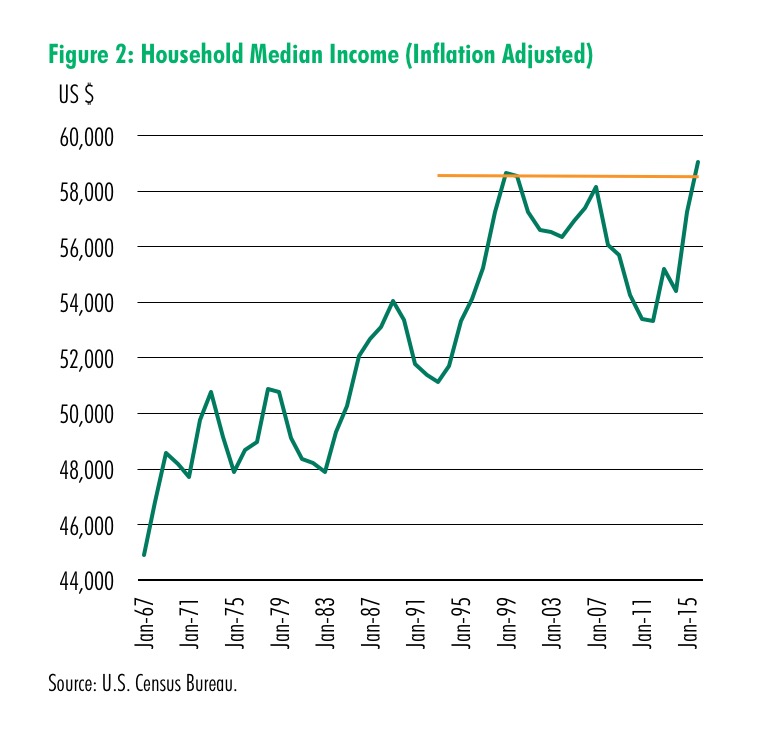 Consumer Deleveraging
U.S. household debt fell by 10% between 2009 and 2013. This is a far bigger headwind for retail property than online retail. With consumer borrowing growing again (and picking up pace), there is marketshare to be won for mall owners who adjust by focusing either on cost leadership or product differentiation.

Durable Goods Deflation
Durable goods are getting cheaper. This is good for consumers, but it does cause retailers problems as they make the initial price cuts and then must adjust their cost structures. Some of the problems department stores are having can be traced to the need for almost constant discounting: It takes their focus off creative merchandising, which is key for retail success.

Growth of the Experience Economy
In a recent Ahead of the Curve, I showed that the growth of demand for hotel rooms and Airbnb space is driven in part by demographics. Older consumers tend to buy fewer goods and more services, including health, education, food and drink and travel. This is a headwind for malls, but it need not be if operators respond intelligently to improve design, services and experiences.

Negative sentiment in the sector is overdone.

Retail is undergoing a structural shift, linked to the growth of the experience economy. Malls can counter these trends, but it requires a creative change of strategy—not so easy if this means reinventing one of the Western world’s greatest-ever business models, but not impossible either. The good news is that incomes are growing and consumers seem more willing to borrow. This should flow through into improved mall performance over the next few years.

Originally published on Dr. Barkham's Ahead of the Curve blog. For more, click here.