Is a Fiscal-Monetary “Collision” Imminent?

It was largely a foregone conclusion that the FOMC would raise the federal funds target rate on March 21. Market participants were instead looking for clues on future interest rate hikes. It’s interesting to note that even though the economy is poised to grow faster, unemployment to fall further, and inflation to remain within the central bank’s target, the Fed’s outlook on monetary policy turned a little more hawkish versus the December 2017 projections.

The median estimate for the federal funds rate remained unchanged (at 2.1% for 2018), but the mean, the lowest and the highest forecasts for the fed funds rate all rose relative to December 2017, implying that the three-vs.-four-rate-hikes debate continues to rage on. Likewise, the median, mean, highest and lowest forecasts for 2019 and 2020 have also risen relative to December 2017 projections. In fact, at 3.4%, the 2020 median fed funds estimate is 50 bps higher than the long-run neutral rate estimate of 2.9%, which itself is 10 bps higher than what was projected in December 2017.

The more hawkish tone on interest rates comes despite the a rather tepid outlook for inflation—core PCE was upgraded just slightly for 2019 and 2020. That said, the Fed’s projections for inflation will likely evolve as the fiscal boost takes hold in an economy that is said to be operating at full capacity. In fact, GDP data and Potential GDP estimates from the Congressional Budget Office confirm that as of Q4 2017, the economy had already been operating above its potential output for two straight quarters. Higher inflation is therefore inevitable.

Figure 1: Real GDP Higher than Potential GDP for the First Time in a Decade

As the fiscal stimulus kicks in and as the Fed’s inflation projections evolve—likely with a bias toward the upside—could the FOMC pencil in rate hikes to come even faster than currently expected?

Based purely the Fed’s current projections, the real interest rate—defined here as the effective fed funds rate minus the rate of inflation—would reach around 1.4% (median fed funds rate minus core PCE) by 2020. A higher real interest rate across all U.S. dollar-denominated securities is sure to attract yield-seeking investors, pushing the dollar up. A stronger dollar is generally a net negative for the trade balance, as imports become more affordable, while exports become less competitive.

All else equal, fiscal stimulus coupled with a rising dollar (due to higher real interest rates)—and particularly with the economy operating at or near capacity—is bound to increase the U.S.’ account deficit—a measure of an economy’s excess investments over savings. U.S. consumers and corporations will likely have to take on more debt to fund this excess investment. The net result is that the U.S. economy is left more indebted, while the country’s key trading partners become the real beneficiaries of the fiscal stimulus and a stronger dollar.

All of the above may seem like conjecture, but today’s economic situation is somewhat similar to what occurred in the early 1980s, when the Reagan administration introduced a raft of tax cuts and increased expenditure on defense just as the Fed was getting ready to tighten monetary policy. While the fiscal stimulus was directly responsible for boosting overall spending and thus raising the trade deficit, the “collision” of fiscal and monetary policies led to a rise in real interest rates, adding strength to the dollar and shifting spending from domestic to foreign goods. 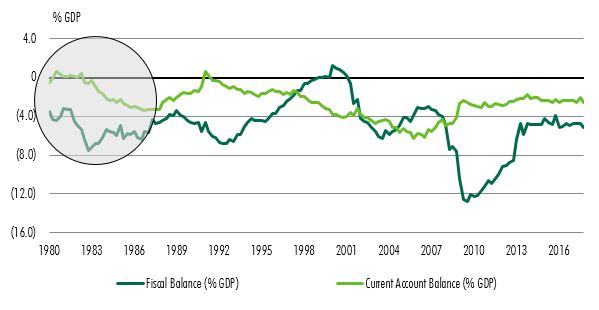 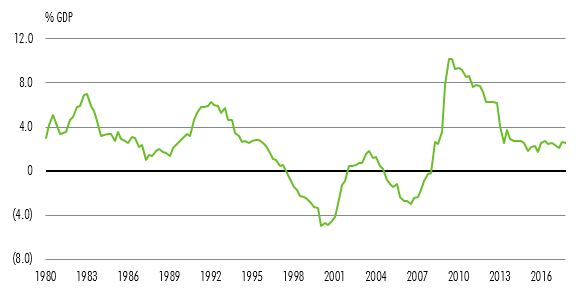 Yes, there have been instances when the fiscal and current account balances have moved in opposing directions. During the Clinton administration, the current account balance worsened despite a healthier fiscal position—due to private sector balances (household and corporate balances) deteriorating sharply. Likewise, just after the Great Financial Crisis, the U.S. trade position improved despite a large fiscal deficit—because private balances improved even faster than it had deteriorated during the Clinton era. As long as the private sector balances don’t see large swings on either side, the fiscal and current account balances will likely move in tandem—which brings me to my next point.

In the present situation, there’s little to suggest that private sector balances will move up drastically, which would suggest that any additional demand created by expansionary fiscal policy will likely worsen the trade deficit as overall expenditure rises. And as the Fed tightens monetary policy, a rise in real interest rates will lead to the dollar rallying, which will shift U.S. consumers’ spending toward foreign goods, exacerbating this worsening of the trade deficit.

Can this collision of fiscal and monetary produce the “twin-deficits,” given current conditions?

The only ingredient that is currently missing from the equation is a strong dollar; the dollar has weakened a little more than 8% since the start of 2018. That might change as the Fed continues to normalize monetary policy, however. Moreover, an expansionary fiscal policy has brought a sense of unease to the bond markets, where yields have risen sharply—particularly for shorter-dated Treasurys. As yields rise, in response to both a tighter Fed policy and loose fiscal policy, so will inflation-adjusted yields or returns. Stronger capital inflows from rising yields will likely push the dollar up. 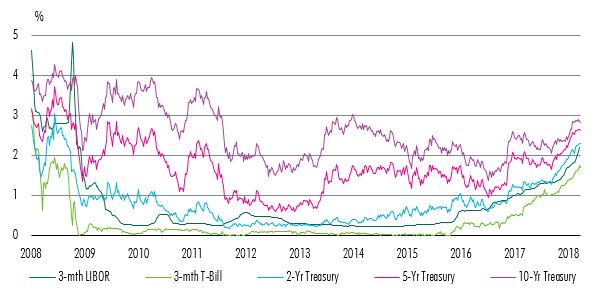 In all, a poorly timed fiscal stimulus—in the face of tighter monetary policy and an economy that is at or close to its potential—could leave the economy weaker in the years to come, as a widening fiscal balance could potentially lead to a weaker trade position. The damage to the trade imbalance could be worse if the Fed’s rate hike path becomes steeper, causing the dollar to appreciate and imports to grow at a faster pace. If anything, the fiscal stimulus could end up stimulating the U.S.’ key trading partners more than it does the domestic economy.