Asian investors are getting less bang for their buck in the U.S.

Rising U.S. interest rates and an uncertain outlook for the dollar have driven up hedging costs significantly for investors from Japan and South Korea over the past year, making it more difficult for them to compete for U.S. real estate deals. With two more U.S. interest rate hikes planned for 2018, and rates in Japan and South Korea expected to remain static, hedging costs will likely increase further.

The annual cost of hedging against dollar depreciation for yen investors (Japan) has increased by 60 basis points (bps) over the past six months, while the cost for won investors (South Korea) has increased by 165 bps. At current exchange rates, a won investor faces hedging costs of about 1.9% per year, while a yen investor faces about 2.8% per year. When considering a property with a cap rate around 5%, hedging costs would erase about half the cash-on-cash yield.

This is beginning to impact the market. As of Q1 2018, rolling 12-month U.S. investment volume decreased by 62% year-over-year for both Japanese and South Korean investors. Although volume had been declining throughout 2017, the drop-off accelerated in early 2018. In Q1 2018, South Korean investment totaled just $90 million, compared to $498 million in Q1 2017; Japanese investment fell to just $51 million from $1.2 billion. This is not to say that Asian investors are out of the game. Deals are still getting done, but the pace has slowed as investment strategies adjust.

Higher hedging costs may reduce competition for core product in gateway cities with very low cap rates, while potentially fueling greater interest in secondary markets where yields are higher. For example, Samsung Life Insurance closed this month on what may be one of the biggest deals of 2018—a 50-story office building in downtown Minneapolis.

These currency dynamics might, in turn, provide profitable opportunities for U.S.-based investors in Japan and South Korea. At current forward exchange rates, dollar investors could lock in additional returns when purchasing won- or yen-denominated assets, and these gains increase as the spreads between interest rates widen. 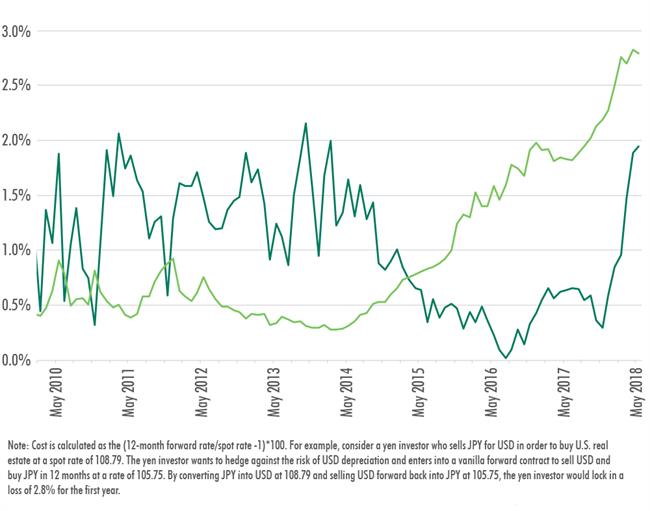 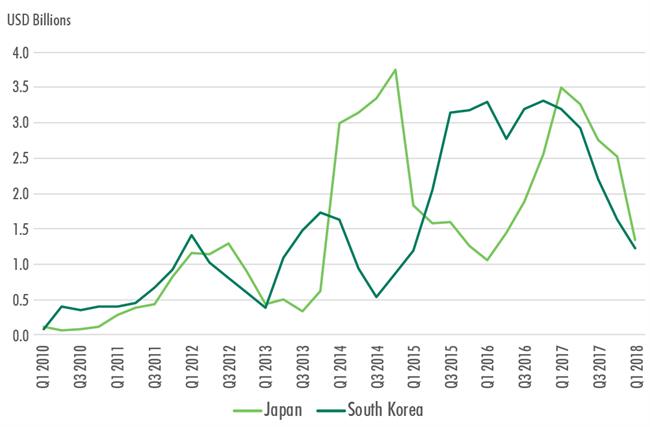