It's not a recession you should be thinking about... It's three recessions

For investors to assess the potential impact of the next economic recession on real estate portfolios, it is prudent to ask how well individual markets will weather it. In a recent study we tried to address this by reviewing the past three recessions and their respective impacts on U.S. commercial real estate (CRE).

Every economic recession has its unique origins, but each can usually be characterized by the macroeconomic scenario that sparked it, of which there are three:

These three recession scenarios have unique impacts on individual markets and property types.

Because the risk profiles of investors differ, it’s nearly impossible to address the question of which markets will be "safe" during the next recession.  So we looked at a narrower set of questions: If the next recession is characterized by an increase in market leverage and debt, which markets will be most at risk?  What does the list of vulnerable markets look like under the other two recession scenarios?

Figure 1. National Decline in Economic Rents during the Past Three Recessions 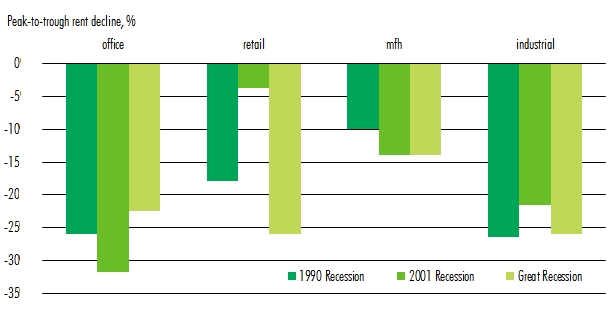 
Nationally, rent declines were greatest in the office and industrial markets during the three most recent recessions, while the impact on multifamily was relatively limited. Retail experienced rent declines during the recession of the early 1990s and during the Great Recession. The 2001 recession affected office rents the most, and had a very mild impact on retail rents. One way to reduce risk exposure during economic downturns, then, is to diversify portfolios across property types as well as across markets. That is something we plan to explore more in the future. For now, we’ve focused on market variation in the office sector.

Figure 2. Office Rent Declines During the Past Three Recessions, by Market 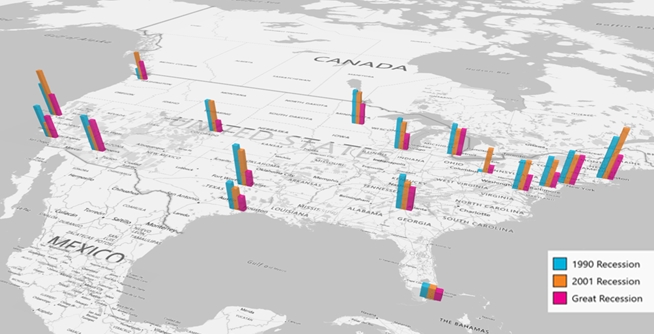 
1990 Recession: A considerable increase in office stock preceded this recession, resulting in an abundance of vacant space when the recession hit.  It took 6 to 7 years for markets to recover.  Meanwhile, the S&L crisis hurt the CRE market by tightening liquidity. This had negative effects on rents in San Francisco, Phoenix, Los Angeles, and Dallas—markets that are vulnerable to credit risk.

2001 Recession: The 2001 recession was triggered by the dot-com bust, after a significant run-up in stock prices. Since this recession was not preceded by the kind of overbuilding we saw a decade earlier, the real estate market was relatively stable; in 14 of our 20 largest markets, rent declines were smaller than in the earlier recession. Several markets were shown to be highly sensitive to this mispricing of assets, however, including San Francisco, Seattle, Boston, New York and Denver.

Great Recession: The fundamentals of the global financial crisis were much different from the previous two recessions.  When the U.S. financial system started to collapse under the subprime mortgage crisis, it became nearly impossible to refinancing debt.  As companies failed in increasing numbers, employment declined sharply, making more space vacant and available. Although the Great Recession had a profound and long-lasting impact on the U.S. economy, the percentage drop in office real rents was smaller than that of the dot-com bust—largely because most markets had yet to recover from their previous low rent levels.

For a given local economy and real estate market, each of these macroeconomic scenarios will mean something different. Understanding the three recession scenarios and being able to estimate individual markets’ vulnerability to each offers investors another way to potentially reduce risk in their portfolios. Read our full article here.