February’s jobs report was strong, with excellent headline numbers, good wage growth and rising labor force participation. Employment rose by 235,000 jobs and the unemployment rate ticked down to 4.7%. The consensus forecast called for 195,000 jobs and 4.7% unemployment. Revisions to December and January produced a net increase of 9,000 jobs. The three-month rolling average increased by 26,000, to 209,000. That average has gained 45,000 over the past two months.

The labor force participation rate increased by 0.1 percentage points, to 63.0%. The monthly number is volatile, but the series has remained between 62.4% and 63.0% since August 2013. A move above 63% would represent a significant change to the labor market and might signal discouraged workers’ long-awaited re-entry into the labor force. The employment-to-population ratio also rose 0.1 percentage points to 60.0%; it has begun to trend upward, after having remained flat through most of 2016.

Wage growth increased slightly—up by six cents, versus five in January—with annualized growth at 2.8%. This was up from January’s 2.5% increase, but still below the 2.9% we saw in December. Wage growth has trended between 2.5% and 2.9% for the past six months.

Construction employment increased by 58,000 jobs, and has gained 177,000 over the past six months. The relatively mild winter may have pulled seasonal work forward in some parts of the country, however, so we may see slower hiring the spring, with those positions having been filled in January and February. Some specialty construction jobs continue to face labor shortages, so it is good to see jobs growing at a solid pace. In this sector, job openings versus hiring will be something to monitor; if there are a significant number of openings going forward, the tight labor market may limit future growth.

Manufacturing added 28,00 jobs in February, and healthcare added 27,000. Even mining has rebounded from low commodity prices, with 8,000 new jobs in February and 20,000 since October’s recent low.

Retail trade was the only area with significant losses—26,000 jobs. This may be a one-month correction after January’s 40,000 increase; the seasonality adjustments may be adding volatility to the sector totals.

Nothing in this strong report should give the Fed pause about its likely raising rates next Wednesday. The headline number is nice, but the growth in wages and participation should cheer people the most. 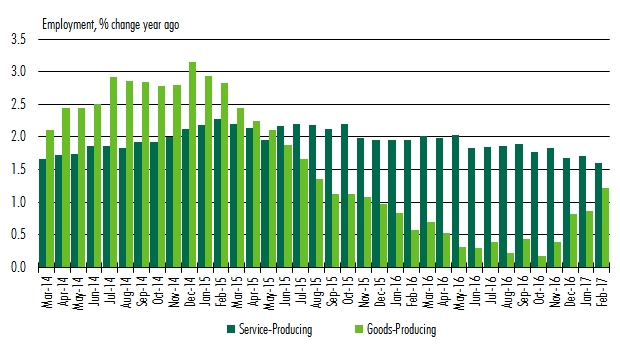 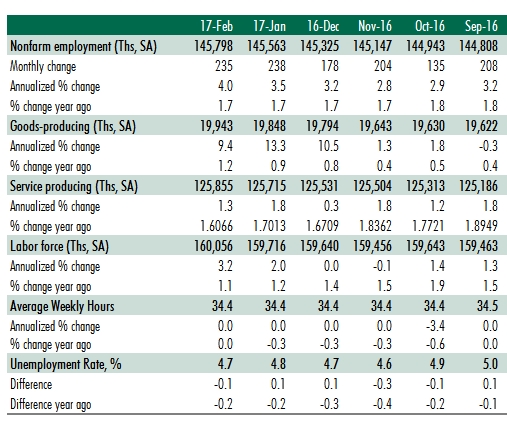