Retail sales grew weakly in February, increasing 0.1% from the previous month, though January growth was revised upward, from 0.4% to 0.6%. Year-over-year, February retail sales registered growth of 5.7%—the second-largest increase of the past four years, behind last month’s 6.0%. Core retail sales—which excludes sales of motor vehicles and parts—grew 0.2% from January and 6% from a year earlier.

A Poor Result for February 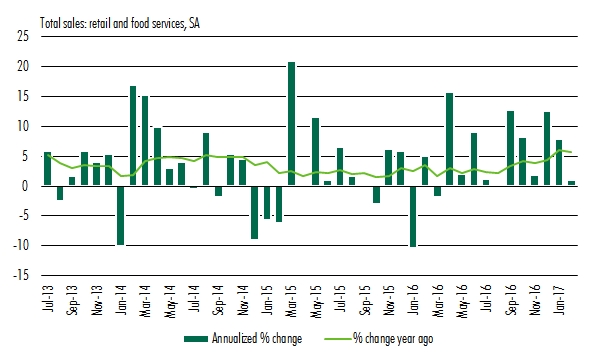 Sales improved in just four of the 13 major retail segments 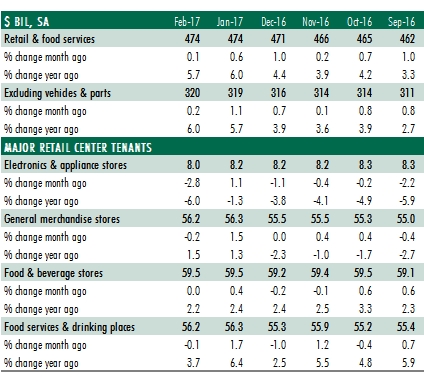 With weakness in most segments, February retail sales disappointed. Sales of electronics & appliance stores slumped 2.8%, while department stores fell by 1.1%. E-commerce's impact aside, immigration policy and delayed tax refunds may have contributed to the weak retail sales and will need to be monitored. According to the IRS, fewer refunds were processed last month than in February 2016, and some filers wouldn’t receive refunds until the end of the month. Meanwhile, immigration policy is a source of concern among retailers in markets with large immigrant populations. With uncertainty discouraging spending among consumers, retail sales in such areas have fallen, leading to stores having a hard time keeping and attracting employees. The strong dollar has also reduced foreign tourists' purchasing power, making U.S. shopping less attractive. Policy on immigration and the economy may represent the greatest risk to retail markets over the coming quarters; retail segments and markets to which immigrants and foreign tourists are especially vital will likely experience considerable shift.

That said, we believe February's retail sales weakness may be temporary, as economic fundamentals are continuing to strengthen. The job market improved again, with non-farm payrolls having registered 235,000 in February and 238,000 in January; this should increase earnings and spending. Meanwhile, rising house prices are increasing homeowners' wealth, which in turn increases consumption. Although we expect better retail sales growth come spring, uncertainty for the retail market has increased relative to a few months ago.