March jobs report: Back to reality

U.S. employers added 98,000 jobs in March—well short of the consensus expectation for 180,000. Revisions to January and February payrolls yielded a net decrease of 30,000. Seasonal weather factors are partially to blame, as snowstorms kept plenty of workers at home last month.

Retail shed 30,000 jobs in March and was the biggest drag on overall job growth. This has been a trend since late 2016, with a number of retailers announcing store closures. Construction is the most weather-sensitive industry, and it showed in the numbers: construction payrolls grew by just 6,000 in March after having increased by 59,000 in February. Some specialty construction jobs continue to face labor shortages, so continued decline in job growth for this sector would not be surprising. Commercial real estate projects are driving a large portion of the hiring, as housing starts have not increased as much as expected. Business and professional services led job gains in March and has done so over the past 12 months. Healthcare was also up by 14,000 jobs and finance was up by 9,000, so the office-using job gains are well-rounded. 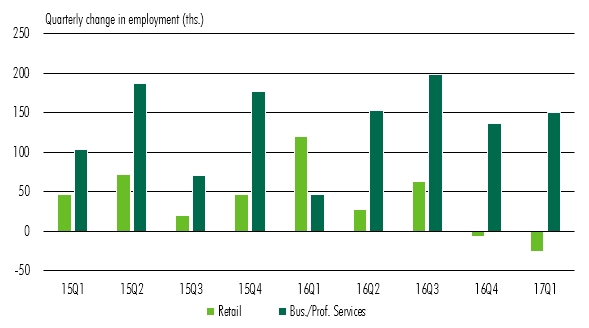 Other details of the report were mixed. The unemployment rate dropped to a cyclical low of 4.5% and labor force participation held steady—both beating expectations. Wage growth faltered, however, as the annual rate of growth dipped from 2.8% to 2.7%. With such a low unemployment rate and with labor shortages in certain sectors, wage growth should start to pick up. Many employers are leaving openings unfilled because of the difficulty finding qualified workers.

The economy is doing as well as expected. Job creation has averaged 178,000 per month this year—versus 182,000 over the past 12 months; CBRE EA’s baseline forecast calls for this to fall to 150,000 or less over the course of the year. While the “Trump Bump” has been evident in business and consumer sentiment, its impact on the jobs data has not materialized. Labor shortages will intensify—especially if there is an immigration crackdown—so any stimulative fiscal policy is unlikely to provide much juice to job growth.