The rise in vacancy can be attributed to supply increase, rather than to decreasing demand. First quarter declines in demand have been typical for the entire post-recessionary period, but as Figure 1 illustrates, this year’s percent decline was even smaller than last year’s. 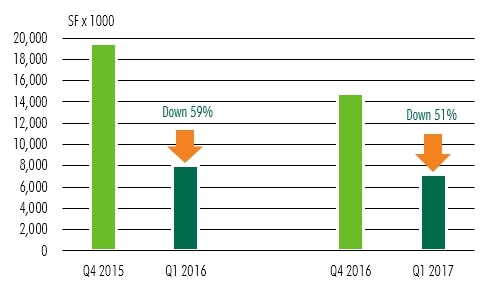 Q4 demand figures have been higher than subsequent Q1s for the past ten years (excluding turbulent 2009), and over 2013-2015, Q1 net absorption declines averaged more than 50%. 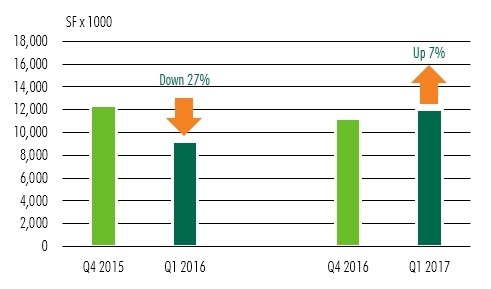 Besides the cyclical increase in new office supply, Q1 2017’s higher completions volume can be attributed to one of warmest first quarters in recent history for everywhere in the U.S. except the Northwest—with very little precipitation in large markets, which is key for construction.

With a large volume of completions scheduled for this year, we can expect vacancy to rise not only in the Bay Area tech hubs of San Francisco and San Jose, but also in Austin, Nashville, Seattle, Denver and Dallas.

Regional and market-level particulars aside—nationally, a mismatch between rising supply and stable demand is causing office vacancy to rise. Overall, the 10 bps increase is not a great surprise; CBRE EA forecasted no change to the vacancy rate in Q1 2017, and going from 12.9% to 13.0% is within the margin of error.