Why is U.S. food consumption resisting the internet?

This week’s M&A activity causes me to revisit a long standing question: Why has the U.S. food-grocery sector completely resisted e-commerce penetration? The share of eaten-in U.S. food consumption purchased through the internet remains at less than 2%, where it has been stuck for years. Contrast this with the rapid growth of internet shares in almost any other sector—from 10% up to 30% in just the last 10 years! Attempts by the food chains to use the internet have generally failed, as have several startups. 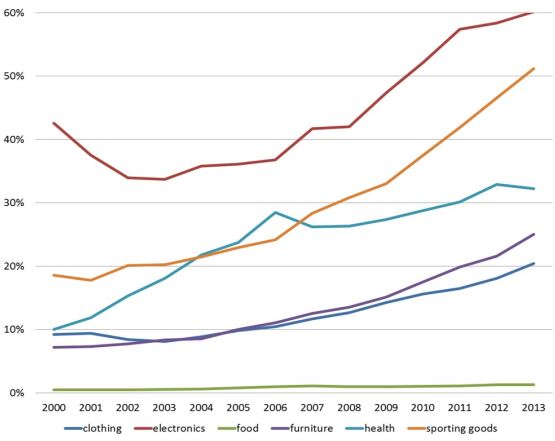 One thought would be that much food is non-durable, perishable, and a partially differentiated commodity. As such, it does not survive storage or transit well, and unlike clothing, electronics, books, etc., no two units of a given item (e.g., lettuce, steaks) are identical, meaning that consumer choice benefits from direct inspection before purchase. Although this idea has merit, it misses the fact that, throughout most of the EU, internet-based ordering and delivery of groceries is thriving and growing, just as it is with durable goods. Why is there such different behavior on the two sides of the Atlantic?

To an economist, one obvious reason is the difference in urban travel behavior. In the EU, there are about 500 cars for every 1,000 people, auto miles traveled annually is around 3,500 per capita, and public transit caries 35% of all workers to their jobs. In the U.S., there are 800 cars for every 1,000 people; 7,800 auto miles are driven per capita; and 92% of all workers commute by car. Carrying groceries while walking, biking or using transit can be quite difficult. Cars, on the other hand, are a perfect carrier of goods.

At a recent MIT Summer Executive course, we had an enlightening discussion about these contrasting styles of grocery shopping. EU students cited a growing tendency to have packaged goods delivered in large batches at lower frequency, while picking up a few perishables in person on a daily basis—typically on a transit commute trip. U.S. shoppers, on the other hand, tended to engage in lower-frequency, comprehensive shopping—using their cars—for volumes of goods that could never be carried in person.

If “clicks” are to ever penetrate “bricks” in U.S. food consumption, it may require differentiating perishable fresh or prepared foods from bulky, heavy packaged goods that need not be inspected for purchase. This suggests some kind of hybrid model in which a food “store” focuses on fresh or prepared foods while also serving as a display center through which consumers can select and order packaged goods for later delivery. Such a combination might be particularly appropriate in the largest U.S. cities, where travel behavior more resembles that in the EU. That said, weaning U.S. consumers off using their cars for just about everything is never going to be easy!