On the strength of the current and future apartment construction pipeline, headlines and commentary are all over the place: It’s common to see “boom,” “explosion,” and “surge” characterizing the current environment, even as reports assert that not enough housing is being built and that much more multifamily housing will be needed to keep up with demand. As is frequently the case, reality falls somewhere in the middle, varying significantly by region. 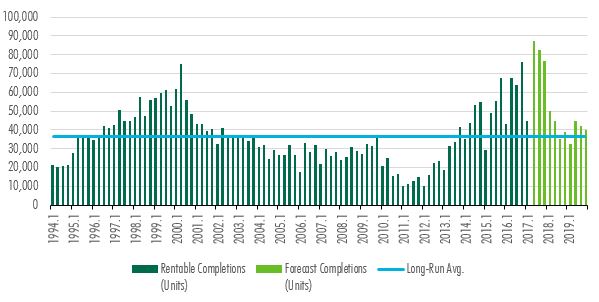 Recent apartment completions have indeed exceeded the long-run average—something we expect to continue through 2019. This does not necessarily warn of oversupply, however. The current expansion has seen sluggish single-family home construction, and the homeownership rate has fallen considerably. That means more renters, and a need for apartment completions to rise to keep up with demand.

We expect apartment completions to reach their zenith in 2017 or early 2018, however. Anticipated completions levels will mean oversupply in some markets, so it’s important to understand where it is concentrated.

If you looked only at total units, gateway markets would dominate the list—they represent 30.1% of the completions expected through 2019. New York alone accounts for 12.3%.

A better way to look at the data is to compare future supply growth to the current inventory base in each market. The chart above shows markets whose supply growth forecasts are notably above- or below-average through 2019.

Markets with high completions rates forecast are concentrated in the Southeast and Southwest, where—up until this point of the present economic expansion—employment growth has been largely exceptional, outpacing the national average.

It’s tempting to think that this robust growth justifies high completions rates in these markets, but there’s more to the story. Employment growth, the main driver of apartment demand, remains ahead of the national average in these markets, but after years it has naturally slowed, given limited labor supplies. With some exceptions, everyone who wants a job now has one. We are at “full employment” in economist-speak.

We are at an inflection point in some markets, where increasing supply will start to shift rent and occupancy growth dynamics. While looking to the past is an important part of any analysis, keep completions in focus.