How much do U.S. hotels depend on international guest stays?

If you ask a person on the street how many people from outside the U.S. visit our fine country each year, the answer would likely be “a lot!” If the same question is posed to a hotel industry expert, the respondent may provide a number close to the actual total of 77,501,282 reported by the U.S. Department of Commerce for 2015. However, few experts could accurately translate international visitation into actual room nights, and likely would have difficulty assigning international visitation and room night totals to cities. The difficulty in making these estimations is that many international travelers stay in the U.S. multiple nights in multiple cities, often have occupancies of more than one person per room, and sometimes stay with friends or family rather than in hotels.

International occupancy is generally an important component of the hotel market mix, both nationally and in large cities. Exactly how important is not well-established by data from trusted industry sources. In this edition of Hotel Currents, we use U.S. government statistics, city travel and tourism reports, and a set of assumptions to come up with proportional allocations of international guest stays in the nation and selected large cities. We find that the number of hotel room nights consumed by international visitors exceeds our expectations.

The U.S. Department of Commerce produces a wide variety of statistics derived from surveys[1] related to inbound travel to the U.S., including types of lodging selected by international travelers. Because these reports do not provide a complete picture of hotel demand by international travelers, selected data are extracted and married with STR data to refine our estimates. Missing information needed to complete the estimations come from thoughtful, conservative assumptions. For example, much of the federal government published information for the nation and cities references overseas travel, while visitation from Canada and Mexico is only reported for the entire U.S. Local data and assumptions therefore are needed to arrive at total (i.e., inclusive of Canadian and Mexican visitors) international visitation for cities.

Visitor agency reports from leading cities provide guidance for some of our estimates. Most of these local reports provide information at high levels of aggregation regarding international travel behaviors without much detail. The notable exception is the 2017 annual report from Miami, which include many characteristics about international visitations.

The process of determining the shares of total rooms sold in a year to domestic and international travelers begins with estimating total international visitation. Here is the process we follow:

To convert international visitation to hotel rooms we need three key inputs. They are:

Here is the process followed to introduce these factors.

Figure 1 presents our raking of the highest-to-lowest ratios of international travel to number of rooms occupied in 2015 for the U.S. as whole and for the top-20 city markets. Two cities—Miami and New York—have ratios exceeding 30%. The national ratio is 6.6%.

Figure 1: International Visitation and Hotel Demand in the U.S. and Top Cities, 2015 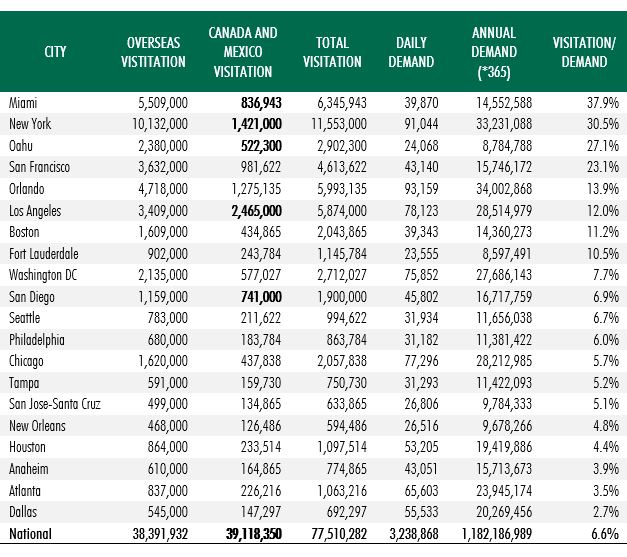 Note: Numbers in bold type for Canada and Mexico visitation are actuals; other non-bolded numbers are estimates.

In Figure 2 we show how international visitation totals from Figure 1 are (1) deflated by party size, (2) inflated by duration of stay, and (3) deflated by lodging choice. The results from this series of adjustments are then divided by annual hotel demand from Figure 1 to arrive at estimates of the contributions of international hotel guests to total demand. The adjustments have the effect of meaningfully increasing the contribution ratios from international visitation in Figure 1 to international hotel stays in Figure 2. We estimate that 8.2% of all hotel guests in the U.S. come from foreign countries. Hotel demand in several cities—mostly along the coasts and led by Miami at 57.5%—are highly dependent on international guests. Because the large city numbers tend to skew the national contribution ratio, international travel appears inconsequential to the health of most U.S. hotel markets.

Figure 2: International Hotel Stays and Hotel Demand in the U.S. and Top Cities, 2015 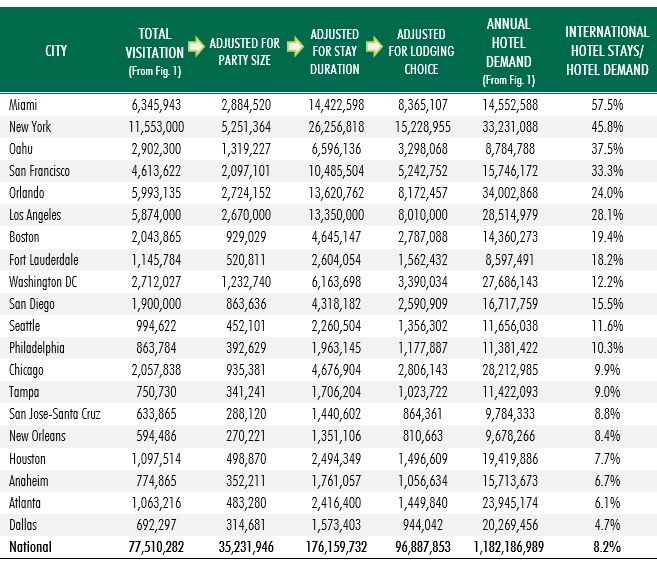 To assess the robustness of our city international visitation estimates, we refer to the results from comparable research by Tourism Economics (TE), a unit of Oxford Economics. Tourism Economics uses a proprietary database (i.e., Global City Travel) that analyzes 50 U.S. and 300 global cities. Its estimates of total annual visitors to each city come from an aggregation of intended address from customs forms, length of stay plans, OAG destination data and local Convention Visitors Bureau subscribers to its service. While the sources of the data are clearly presented for the TE analysis, the methods by which the firm arrived at its conclusions are unknown.

A parallel examination of TE estimates presented in Figure 3 and our own in Figure 2 reveals many similarities. After removing Oahu, which TE does not include, the order of cities in the two lists matches up quite well when arranged from highest percentage international hotel stays to lowest. New York City, for example, is number two on our list with 45.8% international stays; TE lists New York City as number three with 44% international stays. Miami is No. 1 on both lists, although we estimate more than 10% more international stays (57.5% vs. 46%). The second opinion derived from TE provides confidence regarding the integrity of our approach and reported numbers. 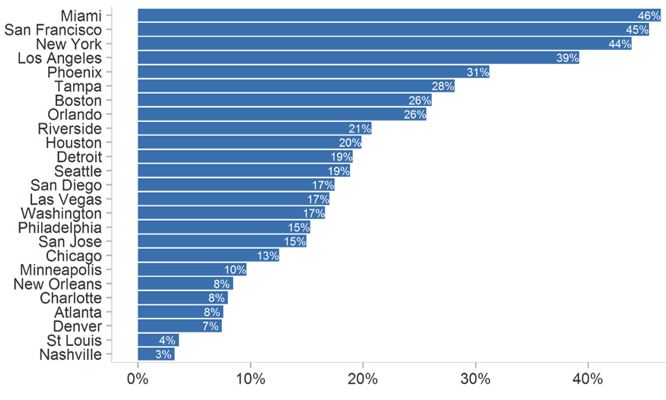 Are we surprised at how high the contribution ratios for international hotel demand are?
Yes!