The U.S. homeownership rate—which stands at 63.7% (Q2 2017)—seems to have stabilized after falling below 63.0% for the first time since 1965. The drop is no surprise in the wake of a global financial crisis and a very large cohort of Millennials that have been delaying marriage, child-bearing and homeownership for a variety of reasons.

We set out to answer a few related questions:

Figure 1. The Effect of Changes in Homeownership on Rent, Quantified 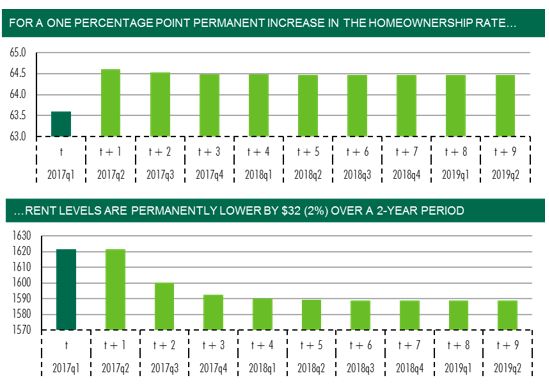 Can we reasonably expect future change in the homeownership rate? We believe so, but we suspect it will vary from market to market. We focus on two primary forces that could bring change—one specific and one broad:

To help guide investment strategy, we wrote an algorithm to aggregate complex data at the market level. We used:

To examine the impact of demographic shifts on market-level homeownership, we applied today’s headship and homeownership rates to Moody’s forecasted populations by age.

To examine the effect of preferential shifts, we assume (naively) that headship and homeownership will return to their long-run means. 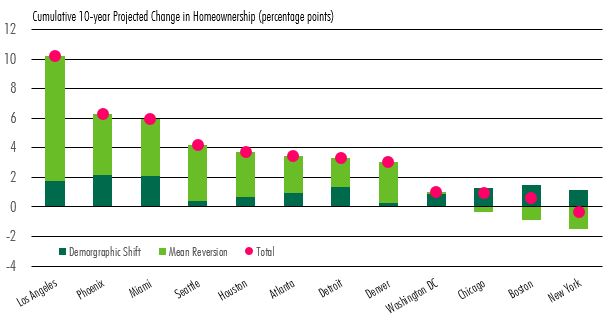 For Los Angeles, Phoenix and Miami:

For Seattle and Denver (also, Houston, Atlanta and Detroit):

As always, such results come with some important caveats:

[1] We used a VAR for this analysis, although we did find consistent results under a variety of econometric specifications.