How much should you care about planned units?

In multifamily investment, a market’s supply pipeline is a critical factor in site selection—and for good reason. If the economy is slowing or entering a downturn, a looming supply overhang can raise competition among assets, with rent growth slowing or inverting as vacancy rises, hurting revenue. Units under construction is the primary metric for assessing supply risk, but it’s important to also consider the risk posed by planned units.

To assess this risk, we took each market’s current number of planned units as a percentage of its stock and then factored in a probability for their completion within a five-year timeframe, based on historical probabilities of the same taken at the peak of the last cycle.

Specifying the peak of the last real estate cycle ensures a valid comparison, as we are likely at a similar point in the current expansion. And our five-year window excludes units that were deferred into the downturn and ultimately delivered during the subsequent cycle, as they aren’t relevant in assessing risk during this cycle.

Figure 1: New Units Expected, as a Percent of Stock 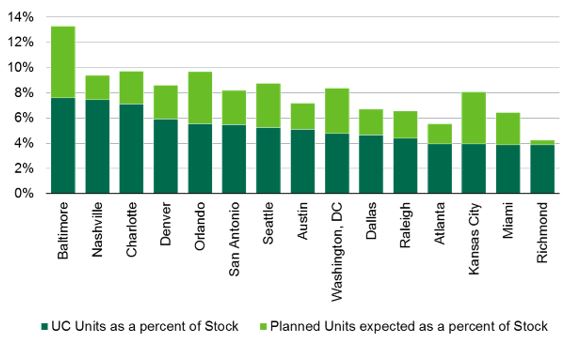 In Figure 1 are the top 15 supply growth markets, as measured by units under construction as a percent of stock. For many of these markets, the number of additional planned units (that are likely to be completed within the timeframe) represents a significant addition to the pipeline—additions ranging from 0.4% (Richmond) to 5.7% (Baltimore) and averaging 2.8%. Baltimore and Orlando are two markets high numbers for both under-construction and planned units. Houston and Detroit are examples of markets with very low numbers for both under-construction and planned units, with the latter amounting to additions of 1.9% and 1.2%, respectively.

Why do the numbers of planned units likely to complete differ so widely by market? The amount of land regulation in a market is a pragmatic, if imperfect, gauge of its planned units’ likelihood to be completed in a timely manner. In Figure 2, we plot each market’s percentage of currently planned units expected within five years against the Wharton Residential Land Use Regulation Index (WRLURI). The more tightly a market is regulated, the higher its score on the Index. 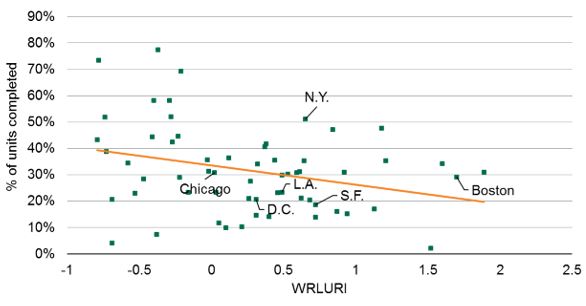 As you can see, planned units’ likely impact on supply varies greatly by market, but it is substantial in many cases. Generally, high numbers of planned units may warrant concern in markets with lax regulation.