Trade disputes so far having little impact on CRE

On July 6, the U.S. imposed a flat 25% import tax on 818 Chinese products worth $34 billion—roughly a month’s worth of imports. The tariff is targeted at high-tech Chinese goods—such as industrial robots, radio transmitters, aircraft parts, computer hardware and electric cars—and is designed to put economic pressure on Beijing’s “Made in China 2025” program. The program is a Chinese government initiative to move the economy higher up the manufacturing value chain. Beijing responded immediately with a 25% tariff on 545 U.S. products worth $34 billion, largely targeting the automobile and agriculture industries.

The U.S. is expected to impose additional border taxes on $16 billion worth of Chinese goods in two weeks, to which China is expected to reply in-kind, targeting $15 billion worth of U.S. crude oil, propane and chemicals. President Trump has warned that depending on how Beijing retaliates, another $200 billion in Chinese goods could be targeted with a 10% tariff, along with the another $200 billion beyond that. If tariffs against China do indeed ratchet up to $450 billion, it would represent nearly 90% of all U.S. imports from China. President Trump has also threatened to impose a 20% duty on automotive imports from Europe, Canada and Mexico—an attempt by the Trump administration to defend the country’s manufacturing sector, which it views as a national security priority.

Figure 1 puts all the above into perspective. Combined with a 25% tax on steel and 10% tax on aluminum imports imposed earlier by the Trump administration, tariffs that have been levied by and against the U.S. affect nearly $145 billion or nearly 4% of U.S. total trade and about 1% of world imports. Tit-for-tat responses could potentially swell this level to nearly $870 billion in total trade, thus accounting for a little over 22% of U.S. total trade and 5% of world imports. 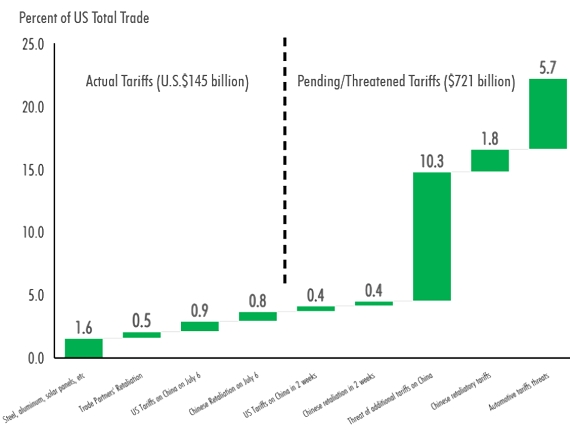 The tariffs come at a time when the U.S. economy has been the strongest it’s been since the Great Recession, while world trade (in value terms) has also been on a mild cyclical upswing (Figure 2). 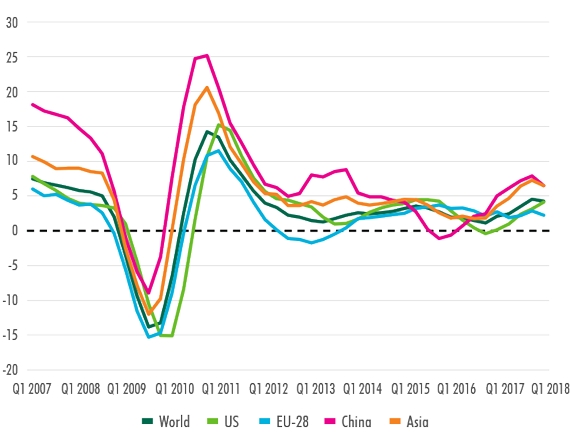 Recent trade data suggest that U.S. exports, particularly goods exports, have continued to expand at a solid pace (14 % year-over-over in May), while the reduction in the trade deficit over the past three months is estimated to have added a full percentage point to growth in Q2. The Atlanta Federal Reserve’s GDP tracker estimates GDP growth at 4.5% per annum in Q2. However, U.S. economic strength has little to do with import tariffs. Rather, it is in part due to the lagged effects of a buoyant global economy in 2017, and partly due to the tax cuts and the stimulus still being provided by only a moderate rise in interest rates. Therefore, it could be a while before the incoming data truly start to show the uncertainties and any potential slowdown associated with any potential trade war.

Moreover, the U.S. and, to some extent, the European financial markets have had a muted response to the imposition of tariffs (Figure 3). The U.S. market’s lack of concern may stem from a hope that cooler heads will prevail and that with any negative effects of tariffs, the president will take a step back. Trade uncertainty has, however, weighed on the Chinese and broader Asian financial markets, with a sell-off in China intensifying since May.

Figure 3: U.S. Market Nowhere Near as Perturbed as its Chinese and Asian Peers 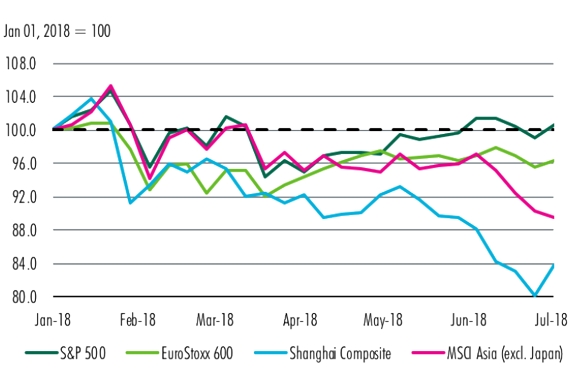 Although the outlook for the U.S. economy remains upbeat due to the ongoing fiscal stimulus, continued strong hiring activity and solid consumer spending, the impending stress from trade uncertainty has started to show up in the manufacturing sector. Even though the Institute for Supply Management’s (ISM) manufacturing index rose to 60.2% in June from 58.7% in May, most of the increase was due to longer supplier delivery times, which rose to the highest level since 2004 (Figure 4). What this essentially means is higher prices, a buildup in back orders and missed deadlines. Longer delivery times disrupt production all along the supply chain. Respondents to the ISM survey have clearly stated that tariffs on steel and aluminum imports that were imposed in March, as well as the threat of higher tariffs on other goods, have disrupted the availability and the price of getting needed materials and supplies delivered on time. 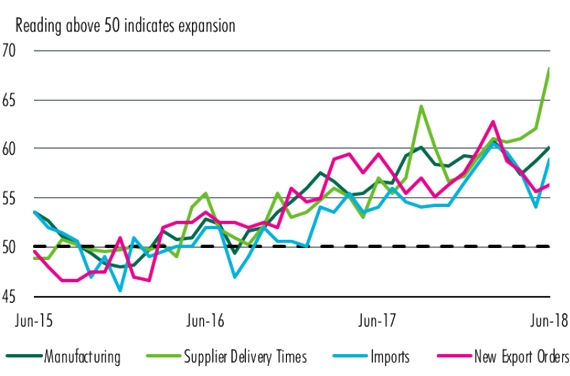 The tariffs imposed thus far are modest, and have a relatively low impact on total U.S. trade. Likewise, there is not much potential impact for commercial real estate, provided that a full-blown trade war does not occur. The greatest impact likely would be on the industrial & logistics (I&L) sector and its supply chain dynamics. If the U.S. moves away from open trade, corporations would be forced to abandon their existing supply chains for greatly shortened ones that focus on domestic sources of materials and parts, and domestic markets.

Two recent CBRE EA research studies have shed light on the likely real estate impacts of such dislocations. In the first—What trade barriers might mean for U.S. warehouse demand—we demonstrate that imports generate most of the demand for warehouses. This is because imported goods must be landed, stored, transshipped and distributed, while exports generally go directly from domestic factory to port.

In the second study—Industrial automation may reduce net demand for industrial space—we conclude that automation leads to less overall industrial and warehouse space demand. Any resurgence in U.S. manufacturing to replace imported goods would likely involve greater automation, which could well reduce the absorption of factory space and warehouses.

What does a tariff on some of these sectors mean? At a product level, farming machinery imports from China—such as poultry incubators and various types of dairy machines—would make it more expensive for American farmers to operate, resulting in price increases for consumers. More importantly, farmers may be unable to absorb higher prices for machinery since the farm sector is already faced with low commodity prices and income, rising interest rates, high levels of indebtedness and relatively poor loan performance. Trump’s proposed product list also includes several varieties of televisions and television components that account for nearly $3.9 billion in trade—meaning that consumers would also have to pay more for certain types of electronic goods. Likewise, any tariffs on various kinds of health-care equipment from China—such as CT scanners, X-ray machines and EKG machines—mean that the cost of medical care could rise.

Given that the U.S. imports only a few vehicles from China, American car prices are unlikely to be significantly impacted by tariffs. However, a Peterson Institute of International Economics study shows that the president’s threat to impose a 25% duty on all imported automobiles would cause production in the automobile industry to fall by 1.5%, with potential job losses totaling 195,000 within three years. Additionally, if U.S. trade partners were to retaliate, the fall in production would be closer to 4%, while 624,000 jobs could be at stake. In all, nearly $208 billion worth of passenger cars, SUVs, minivans and trucks from the European Union, Canada, Japan and Mexico could fall under the 25% tariff bracket. That number could rise if automotive parts are included.

A potential increase in the tariffs on automotive parts could mean that the price of a Toyota Camry built in Kentucky, parts for which may come from Canada or Mexico, could rise as much as $1,800, according to Toyota. In such cases, companies would have to decide how much of the additional costs they could absorb and how much could be passed on to consumers. If automakers consider re-shoring (moving production back to the U.S.), they will need to factor in the costs of broken supply chains, investment uncertainties caused by the trade conflict and less demand for products due to higher prices. Additionally, automakers are also concerned that higher tariffs would mean less capital to spend on development of self-driving cars and electric vehicles.

According to a study by the Brooking’s Institution (BI), even though the total number of jobs at risk from China’s retaliation remains modest, China’s tariffs target 40 U.S. industries (based off NAICS codes), in which nearly 2.1 million jobs may be at risk. The study shows that many rural and Midwestern workers could be adversely affected by China’s retaliatory tariffs on agriculture and manufactured goods.

Soybean farmers, for example, likely will be hit the hardest and fastest. The U.S. exports nearly 30% of its soybeans to China, with Wisconsin accounting for around $7.2 billion worth of soybean crop in 2017. With tariffs in effect, demand for U.S. soybeans will likely take a hit with Chinese consumers looking elsewhere. Farmers may be forced to sell their excess produce in the domestic market. Soybean futures are showing a sharp drop off in expected prices.

There is precedent from which to draw. In September 2009, when unemployment stood at 10% and the U.S. was starting to recover from the recession, the Obama administration imposed tariffs on Chinese tires of 55% in year one, 45% in year two and 35% in year three. By 2012, the administration claimed that the tariffs had saved nearly 1,200 jobs. A study by PIIE found that due to higher consumer prices for car and truck tires, the total cost to U.S. consumers from the tariffs was around $1.1 billion in 2011—meaning that the cost of saving a U.S. tire manufacturing job was nearly $900,000 in that year. The study also found a blow to consumers’ purchasing power led to 3,731 lost jobs in the retail sector, resulting in a net loss of around 2,500 jobs.

The current tariffs and those that have been proposed could end up having a similar—if not more pronounced—effect of collateral damage to the economy. It is for this reason that we do not believe this will snowball into an $870 billion trade war. Moreover, many analysts believe that President Trump’s rhetoric is part of a negotiating strategy to improve the terms of trade. Perhaps the one factor that would truly force the president to rethink his strategy is if U.S. financial markets, which have thus far been relaxed, show a degree of uneasiness regarding the current trade policy.