How does the economic cycle influence the length of office leases?

With some recent interest in whether the economic cycle affects the length of office leases, we decided to look at quarterly U.S. office-leasing data for the past 35 years—a period that includes several economic recessions and periods of high and low inflation.

We divided the leases into four categories by size in sq. ft. to account for larger leases generally having longer durations. We plotted the four series in Figure 1, using a four-quarter moving average to reduce quarterly noise. As expected, larger leases have tended to be longer. Larger leases are also more noisy (even when smoothed) because there are fewer of them. 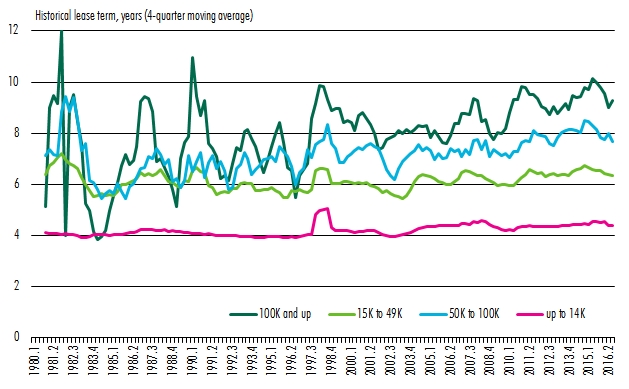 Generally, lease term lengths have been quite stable over the past 35 years, with a slight increase in length across all lease sizes starting in the late 1990s. Slightly shorter lease terms are observable after the dot-com bubble and the global financial crisis, although these reductions were not particularly significant. Starting in 2015, lease terms began to shorten slightly.

Regional real estate research indicates that lease length is affected by several factors, including contractual options to extend them, as well as the amount of available sublease space, and these factors vary from one metro area to another. The typically shorter duration of average leases in sublease-rich markets is more a reflection of sublease availability than greater tenant demand for shorter leases.

If we examine lease duration for all leases over the past 16 years—where smaller leases will be overrepresented as they account for a larger share of all transactions—it appears that lease duration has gotten longer, with some cyclicality in lease duration due to economic downturns. 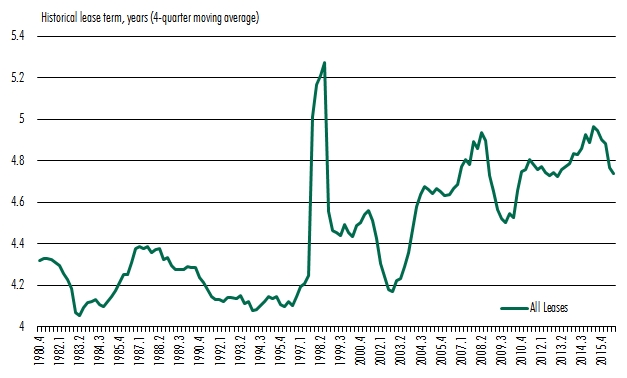 Overall, our results suggest that tenants seeking smaller space generally do not use lease length as a means of protecting against inflation. Most leases are still executed using a more simple formula: lease term is proportionate to the size of the lease. However, based on the pro-cyclical movements observed in our series, at least some large and medium-sized tenants and their landlord counterparts do strategically account for our position in the economic cycle when setting lease terms.