Apartment supply: What a market needs

Although many U.S. apartment markets and submarkets are seeing elevated supply trends soften their fundamentals, in some cases this is needed supply and these are the natural “growing pains” of densifying, maturing cities.

The ratio of jobs to apartment units is a common (albeit imprecise) measure of the balance between apartment supply and demand, indicating the number of new jobs—the primary driver of apartment demand in the U.S.—needed to absorb one additional apartment unit.

Each market or submarket has its own equilibrium ratio, and there are many factors that determine a steady state. Household size plays a role, for example: a higher average household size will generally yield a higher ratio—with more jobs concentrated in each household, fewer apartment units will be needed.  Similarly, homeownership matters: a higher homeownership rate will yield a higher ratio, as fewer apartment units will be needed for a given number of jobs.

Figure 1 displays the jobs-per-unit ratios for Seattle, Denver and EA’s Sum of Markets. Seattle’s ratio is consistently lower than those of Denver and the Sum of Markets—unsurprising, since Seattle is a mature city that is denser and has a lower rate of homeownership. Denver, meanwhile, is maturing, and its ratio has trended downward as it attracts thousands of new households each year and maintains a relatively young population. 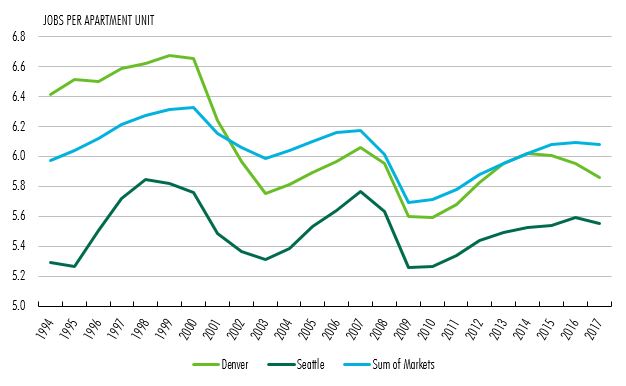 Since density is associated with lower homeownership and smaller household sizes, it seems that urban cores should have lower ratios than their respective markets. In Seattle, this is certainly the case—the downtown ratio has remained between 4.0 and 4.5 jobs per apartment unit for the past 15 years. Developers of Seattle apartments have done a great job keeping pace, maintaining a stable equilibrium.

Figure 2. Seattle: very consistent over time and consistent with the theory 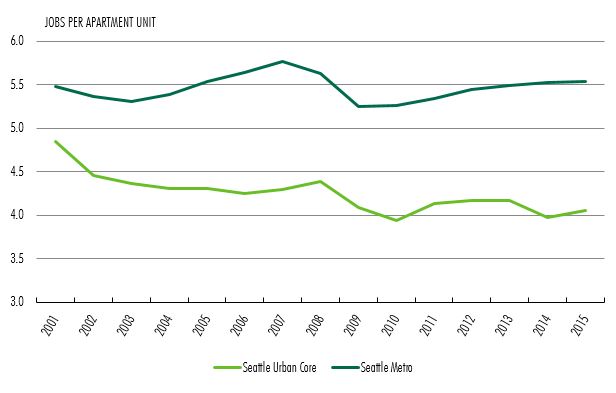 We’ve written before about the persistent upward trend in urban core apartment development. As of December 2017, nearly 23% of all units under construction in the U.S. were in urban cores (compared to 6.7% in 1997). Denver is no exception: with more than 6,667 downtown units under construction and another 3,069 units in planning, Denver is poised to increase its downtown apartment stock by 35%-50%. Those are big numbers.

In 2000, Denver’s downtown ratio was 16.4 jobs per unit. This is simply too high. Choose any benchmark and this represents a residential market that has continually underserved Denver’s downtown employment base. I often hear that Denver’s downtown apartment sector is being overbuilt. The reality is that all of the recent construction has brought Denver’s ratio down to 5.9 jobs per unit—which is just below the metro-wide steady state ratio of 6.1. 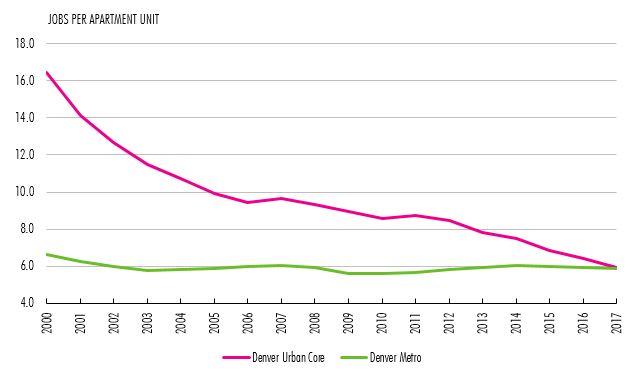 It isn’t clear what downtown Denver’s equilibrium ratio is—though we probably aren’t yet a Seattle 4.0-4.5. It stands to reason, though, that Denver will densify further. Under a few basic assumptions about downtown job growth and apartment completions, Denver can expect its ratio to reach 5.3 jobs per unit by year-end 2019. Sure, Denver is delivering a lot of new product in a short period—and growing pains have resulted—but this is needed supply as the city matures.