Multifamily to get big boost from new tax plan

The new tax plan’s increased standard deduction of $24,000 for a married couple has now provided renters in many more markets with benefits that were previously only enjoyed by homeowners. Of the 35 U.S. markets with a population of 2 million or more, only 15 had seen a greater benefit from the standard deduction than from the specific itemized deductions offered by homeownership prior to tax reform. Now, with the new tax law’s increased standard deduction, that field has increased to 29 markets (including larger cities such as Miami, Philadelphia, Chicago, Denver, Seattle and Washington, D.C.) where the tax benefits of owning a home are significantly less. Previously, only smaller markets (except for Detroit, Atlanta and Houston) with lower housing costs saw these benefits for their renters.

Additionally, the limits placed on state and local tax (SALT) deductions and mortgage interest deductibility under tax reform have impacted three markets on a median basis: New York, San Francisco, and San Jose. Beginning this year, purchasers of a median-priced home in San Jose will lose the ability to deduct 37% of their total interest in the first year, and more than $3,000 in SALT, amounting to $22,000 in itemized deductions. San Francisco will see a loss of nearly $4,000, while New York will see a loss of just $500.

Based on our findings, tax reform most affects high-income, high-value housing markets on the West Coast and in Northeast coastal cities from Boston to Washington, D.C. 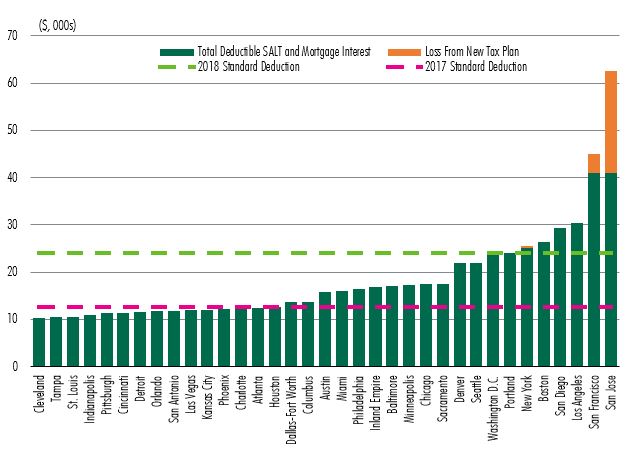 Note: the 2017 and 2018 standard deductions shown are for married couples.

Despite the notion that firms tend to minimize tax exposure by selecting localities with low tax rates, many firms often make location decisions that are not largely driven by tax considerations. For example, in the search for qualified workers, many technology firms locate in cities where they can find highly skilled tech labor, rather than locate in cities with the lowest corporate taxes. While lower taxes do attract some firms, less tax revenue means less spending on public facilities, services and infrastructure—all of which benefit companies and their workers. This is why markets with relatively high tax rates and a high cost of living may continue to attract employers.

Accelerated depreciation likely will stimulate the faster replacement of older and generally less-productive equipment. With automation on the rise, new capital expenditures likely will result in fewer workers—creating winners and losers among job categories, industries and cities. Elimination of labor through automation in the long run could create migration flows from regions and industries where jobs can be automated to regions with jobs that require creativity or can’t be easily replaced by machine.

For information on the methodology used to derive our conclusions as depicted in Figure 1, please feel free to contact any of the CBRE professionals listed below.