With the unemployment rate at an 18-year low and the job openings rate reaching new highs each month, March marked the first time the economy had a job opening for every unemployed person. The ratio of unemployed persons to job openings, having peaked at 6.6 in June 2009, was down to exactly 1 in March. The data points for April and May will likely show more jobs than job seekers. Meanwhile, anecdotal evidence suggests that difficulty finding enough workers is most businesses’ foremost concern. Companies are revising their hiring practices to ensure they don’t rule out any good candidates, particularly those who might not have college degrees.

Despite an ever-tightening job market, wage growth remains lackluster and well below historical trends: In 2000, unemployment was as low as it is today, and average hourly earnings were rising at roughly 4%, year over year. There are several theories as to why wages haven’t risen more sharply: low productivity, underemployment, firms wanting to give their part-time employees more hours rather than hiring additional workers, and the possibility that rising health-care costs are forcing employers to put toward health coverage money that would otherwise have gone toward wage increases. There is little to no consensus on this, however, especially since conditions are ripe for workers to finally get substantial pay increases. The subdued wage growth has held the Fed’s preferred gauge of inflation (Core PCE) well below the 2% target. 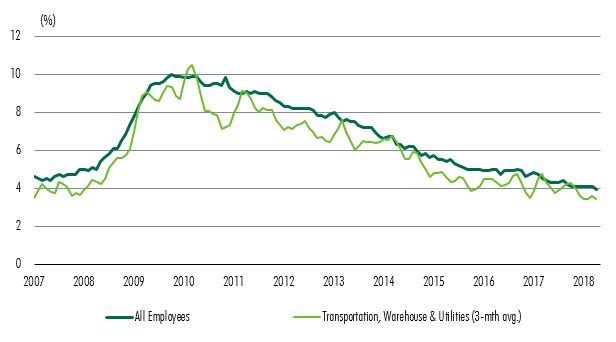 Figure 2: More Jobs than Job Seekers in the Transportation and Warehousing Sector 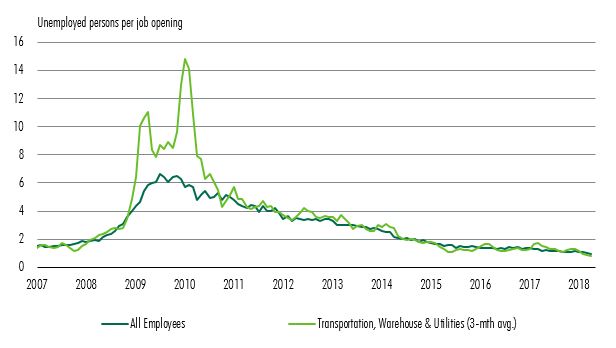 All of this may be about to change, though: a significant shortage of truck drivers is raising shipping costs, which may spark the expected inflationary pressures that have thus far remained absent. In fact, the ratio of unemployed persons to job openings in the transportation and warehousing sector fell below 1 in January. Although there has been a shortage of truck drivers in the U.S. for the past few years, it is expected to worsen, leading to a more acute situation this year and in the years to come. An American Trucking Association (ATA) report identified a shortage of 51,000 truck drivers in the logistics sector at the end of 2017; this is expected to rise to more than 61,000 in 2018 and to 174,000 by the end of 2026.

With nearly every sector of the economy expanding and online sales continuing to soar, the rise in demand for truckers doesn’t come as a surprise. Furthermore, new federal legislation requires that drivers be on the road for no more than 11 hours at a stretch, with electronic devices tracking their time. Equally important, the average driver age in the for-hire over-the-road truckload industry is 49, according to surveys by the ATA. Other trucking sectors have an even higher average age. With a large pool of drivers expected to retire this year and in the coming years, the shortage will likely become even more severe.

This will eventually become a problem for the entire supply chain, as nearly 71% of all freight tonnage is moved by road, according to the ATA. Additionally, the American Transportation Research Institute notes that 43% of trucking’s operational costs are tied to driver compensation, making it a motor carrier’s largest operational cost. Manufacturers have already begun to complain about higher shipping costs eroding profits. Walmart, for instance, has stated that shipping costs are currently its “primary headwind.” Trucking companies have tried to combat the shortage by offering pay raises, larger signing bonuses and shorter hours.

As a result, according to DAT—the trucking sector’s database for freight and truckload capacity—April’s trucking price per mile stood at all-time high of $1.85, up nearly 30% from the $1.43 of a year earlier. Likewise, the producer price index for truck transportation and Cass Information Systems’ Freight Indices (Truckload and Intermodal) show a sustained upward trend in freight rates for trucking. 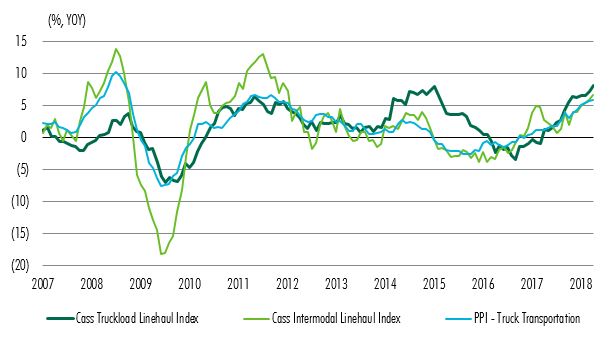 Higher freight rates will eventually see trucking-serviced businesses passing the rising costs on to their customers, leading to higher prices for everyday items. Amazon, for instance, recently raised the price of its Prime membership—which includes free two-day shipping—by 20%, to an annual $119. General Mills has decided to raise prices on some of its cereals and snacks, owing to the sharp increase in freight costs. Tyson Foods, the largest meat company in the U.S., is expected to spend an additional $250 million on shipping. Coca Cola, toy-maker Hasbro, Procter and Gamble and Nestle have also reported that freight costs have begun to weigh on earnings.

In all, rising logistics and transportation costs—combined with the recent increases in diesel fuel costs—could finally mark a turning point for U.S. inflation. As shipping costs rise, consumers will likely pay more for clothing, food, and any other everyday items that are bought in-store or online. In the coming months we may finally start to see some acceleration in the Core PCE index—the Fed’s preferred gauge of inflation—as the second-round effects of rising shipping and fuel costs percolate through to everyday consumption items. Lastly, in the medium term, rising consumer prices will also likely affect the volume of goods moving through warehouses and distribution centers.