The ongoing pandemic, which reached the U.S. in January-February, didn’t gather enough strength to derail commercial office activity in the first quarter of 2020. Vacancy increased modestly, by 20 bps, while the estimated office rents climbed up another half percentage point nationally. Favorable results were in part due to completions of ongoing deals that weren’t put on hold, quarterly data collection methods used, and reasonably optimistic views on the expected duration and severity of the economic slowdown.

Looking forward, the rest of the year will likely carry most of the brunt of today’s crisis, which already claimed over 20 million U.S. jobs with the unemployment rate spiking to 14.7%, according to the Bureau of Labor Statistics - the highest rate since the Great Depression. Despite this staggering rise, 9 out of 10 respondents to the BLS survey considered themselves to be on a temporary layoff. Moreover, most of the layoffs happened in leisure and hospitality, and retail sectors. The tech and financial sectors recorded comparatively smaller declines. Given the unequal sectoral impact and temporary nature of many layoffs, we believe the current trend lends the support to a V-shape recovery, with the office sector benefiting from a fast adaptation of work-from-home policies, which preserved productivity for many major U.S. companies.

Nonetheless, the U.S. office market will not be able to go through the crisis unharmed. We expect U.S. office vacancy to rise from its current 12% to almost 15% within a year. We expect rents to decline by 9% over that same time frame. But, with a V-shape recovery, we expect to see a sharp rebound of economic activity in the second half of 2020 and during 2021, with most office variables returning to pre-crisis levels by the first half of 2022, leading the office sector back to its long-run growth path. 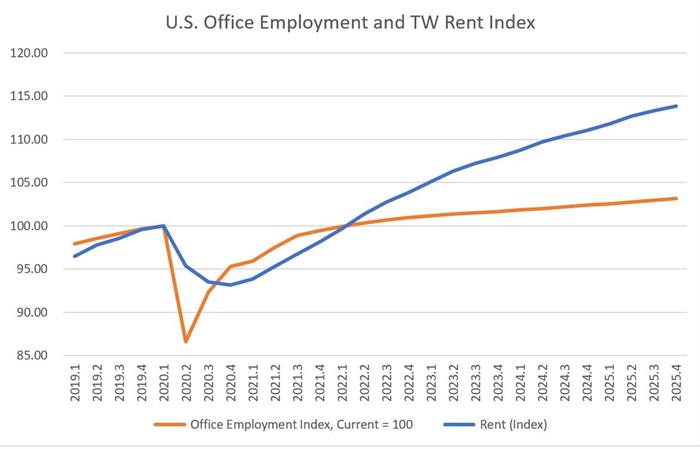