Nov 14, 2022, 13:23 PM by Matt Mowell
Tourists are returning to major cities, such as New York and Chicago, but urban hotel demand as of September 2022 remains below 2019 levels (Figure 1 – vertical axis).  As the U.S. receives more international travelers, especially from Asia, hotel performance will likely improve.

Similarly, the share of office workers in the office is up markedly from early 2021 (Figure 1 – horizontal axis) but below pre-pandemic levels. Ostensibly, office attendance and hotel demand are recovering together but evidence that one causes the other is thin. Certainly, increased hotel demand could boost office attendance as out-of-town senior leaders or vendors fly in for face-to-face meetings, encouraging local workers to venture into the office. But other factors are at play as well.

The upper-right quadrant is populated with Texas cities that don’t depend on mass transit and generally have lower commute times, both factors that underpin higher office attendance. Interestingly, the Texas cities have also seen sturdier hotel demand and they’ve benefited from population net in-migration during the pandemic. 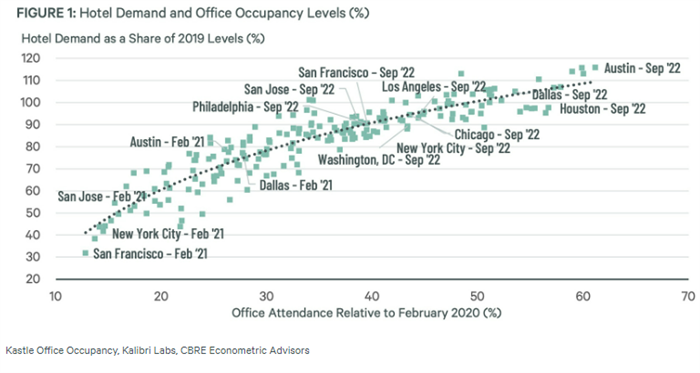