Last time the U.S. unemployment rate fell below 4% was 2000. At the time, annual growth in office rents had exceeded 5% for five consecutive years, arriving at a high mark of 11% that year. Construction had burgeoned in a robust economy until, as we know, the music stopped. We have discussed the key role central banks play in economic cycles,[1] but that is not to say businesses and consumers are off the center stage.

As the job market tightens, occupier demand increases and rental growth accelerates, investors, lenders, and developers collectively do more business, take on more risk and drive up supply to match the rising demand. This heats up the economy, and inflation urges the central bank to raise interest rates. Demand usually softens after that, while supply growth moves on with overbuilding and overtaking, which trigger a recession.

But we may find ourselves in an unusual case this time: eight years and ten months have passed since the unemployment rate peaked in October 2009. By comparison, it took seven years and 10 months for unemployment to move from peak to trough during the U.S.’ longest recorded cycle, which lasted 11 years. We are on track to break the longest-cycle record. 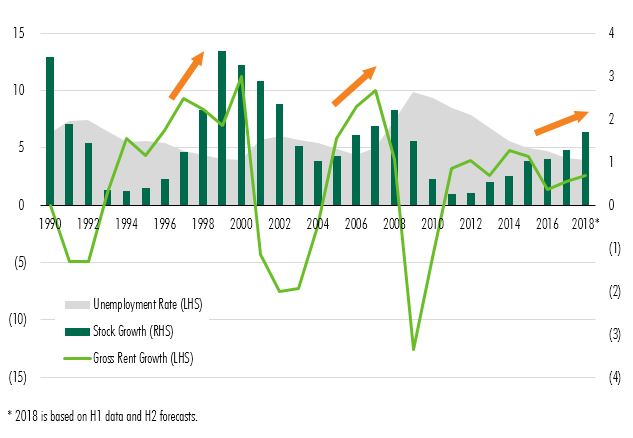 For the past four months, the unemployment rate has remained at 4% or less. Inflation has been steadily rising. The Federal Reserve has raised interest rates seven times in the past three years. The consensus is that we are late in the cycle. However, rental growth has lagged core inflation. Supply growth has yet to pick up its pace (Figure 1). We expect the office stock to grow 1.7% in 2018, but that rate is nowhere near the previous high. Considering the soft rental growth against upward movement in borrowing and construction costs, investors are not highly incentivized to increase supply.

Why hasn’t rental growth climbed higher during this economic expansion? In 2012, office-using job growth surpassed that of 2005, and rent growth was at comparable levels (Figure 2). Nonetheless, investors remained risk-averse. The 10-year Treasury yield hit a low of 1.4%. In September 2012, the Fed initiated an open-ended Quantitative Easing (QE), attempting to boost market confidence and stabilize growth. 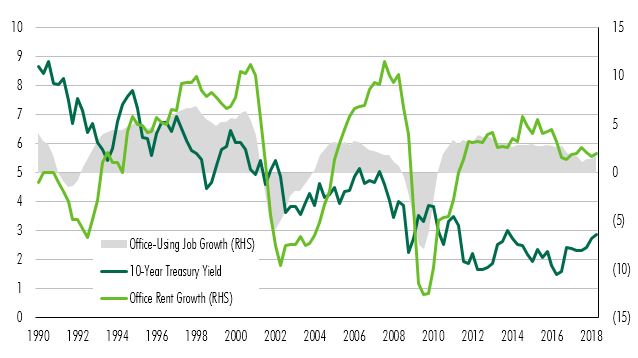 We won’t address the QE impacts in detail here, but the Fed’s move largely encouraged prudence in the market. Confidence did not seem to rise as quickly as the Fed’s balance sheet, however. The market reacted badly in 2013 when the Fed stated its intent to scale back bond purchases. As soon as supply gained momentum, rental growth moderated.

Fiscal policy is not the only unique character this cycle. Digitization has also played a significant role. Since 2010, financial companies and governments have been consolidating their physical space while raising their investment in technology. More businesses have begun develop workplace strategies that create a more collaborative, secure and efficient office environment. This trend continues, in sync with the rise of co-working space.

We think the slow growth of rent and supply will continue during the extended cycle. Without over-expansion, we don’t expect to see the national imbalances that investors saw during the past two recessions.