Availability Continued to Increase in Q1 2020

Preliminary data show that availability increased in the industrial market in Q1 2020, rising from 7.2% in Q4 2019 to  7.3%.  Availability has steadily increased since hitting multi-decade lows at the end of 2018 and is now 0.3% higher than at this time last year. Industrial completions totaled 55.4 MSF in Q1, exceeding net absorption of 34.0 MSF during the quarter. This marks the fifth consecutive quarter in which completions outstripped the pace of absorption as high rents continue to stimulate new construction.

The spread of the COVID-19 pandemic likely had a minimal effect on industrial real estate results at the start of the year, as lockdowns and business closings largely took place at the tail end of the quarter. However, early results suggest that the U.S. economy tipped into recession during Q1 and is likely to contract sharply in Q2. Purchasing manager’s index data from IHS Markit for the manufacturing sector fell to 49.2 in March, marking the lowest point since 2009. The economy also lost more than 700,000 jobs in March, reducing support for consumer spending in the economy. These macroeconomy effects and the general uncertainty surrounding COVID-19 will likely weigh on demand for industrial real estate over the next few quarters, though the accelerating shift toward e-commerce should soften the blow in 2020. 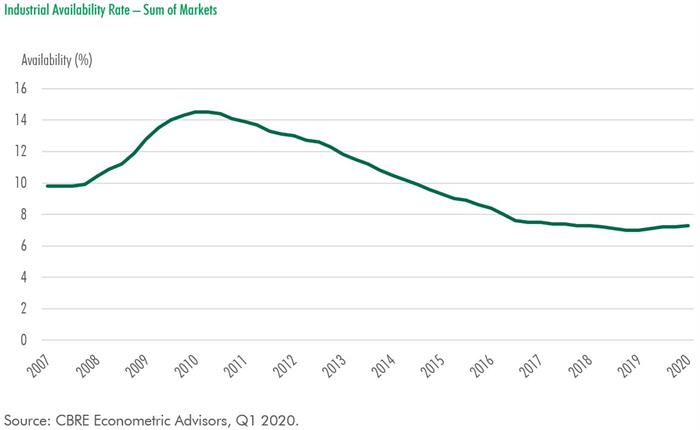 Among the 64 Tier I markets, 26 saw lower availability rates in Q1 compared to the previous quarter, and 22 recorded year-over-year declines. On a year-over-year basis, some of the largest decreases were in Albuquerque, Baltimore, and Dayton which each experienced an over-100 basis point decline in availability. In addition, a surge in absorption in Wilmington led to a whopping 720 basis point decline in availability from this point last year.

Industrial availability increased in 34 markets in Q1 compared to the previous quarter, and in 38 markets relative to last year. The largest yearly increases occurred in Jacksonville, St. Louis, San Francisco, and Houston, which each saw availability increase by more than 150 basis points.

To access the full report and data   BECOME A CLIENT